Not meant to be an “authoritative” list, just good books we have come across and have read.

Integrating Delaware: The Reddings of Wilmington

This is a well researched and written book on Lewis Redding, the Wilmington resident who arguably played the decisive role in the Civil Rights movement in Delaware and was instrumental to the 1954 Brown vs Board of Education decision.

Everybody Ought to be Rich: The Life and Times of John Raskob, Capitalist

A great biography of former Highlands resident and senior Dupont Executive, who among other things founded Archmere Academy, built the Empire State Building, and was the chairman of Democratic Presidential Candidate Al Smith’s 1928 campaign.

I Well Remember : Memoirs of a Mennonite Schoolmaster

A very interesting memoir by an Ohio native who came to Wilmington to work for Wilmington High School in the 1930s and then went onto a long career as an education administrator and principal.

A Sailor’s Diary: In War and Peace

An excellent memoir by Ed Buckalew, a  local Wilmington resident who went on to fight in several battles in the Paciifc During WW2.

Against All Odds the Ray Firmani Story

The biography of a city resident who grew up in Wilmington during the 1930s before going on to fly 25+ combat missions against Nazi Germany.

The classic history of 20th century Wilmington by a former University of Delaware professor.

Delaware Eye Witness: Behind the Scenes in the First State.

Great new memoir by a life-long Wilmingtonian that’s been in the thick of DE politics and business for many decades.

The History of 40 Acres

An excellent book on one of Wilmington’s most interesting neighborhoods

PS Dupont and the Making Of the Modern Corporation

Classic biography of PS Dupont who was the single most influential person in the creation of modern Delaware, if not the modern US corporate economy.

The Company State : The Nader Report on Dupont in Delaware 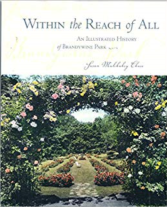 Within Reach: An Illustrated History of Brandywine Parks

An excellent book by Susan Chase.  Without the forward thinking vision of a half dozen or so of the city’s leading industrialists in the late 1800s, who knows what the area that is now Brandywine Park would look like today.

The  Horse on Rodney Square.

The History of a Hospital Merger: Wilmington Medical Center, 1965-1985 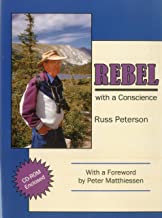 Russell Peterson:  Rebel with a Conscience.

Articles, Online Media and Other Links from Recent Years:

Wilmington Veteran  98, Looks Back on his Time as an Airmen in WW2.

An interview conducted recently by Marina Affo in the News Journal.

Tom Gears and Raymond Harrington have an incredible blog that frequently posts on their research into the old newspapers from Wilmington area history.

Detailed research posted on Nathan Field’s book project on the impact of World War Two in the City of Wilmington, which left over 400 residents dead.

Some detailed information on the long history of Howard,  the oldest existing school in Wilmington

The Local Dining Scene – Advertisement in the Evening Journal, April 1919

The Saloons of 1920 Wilmington 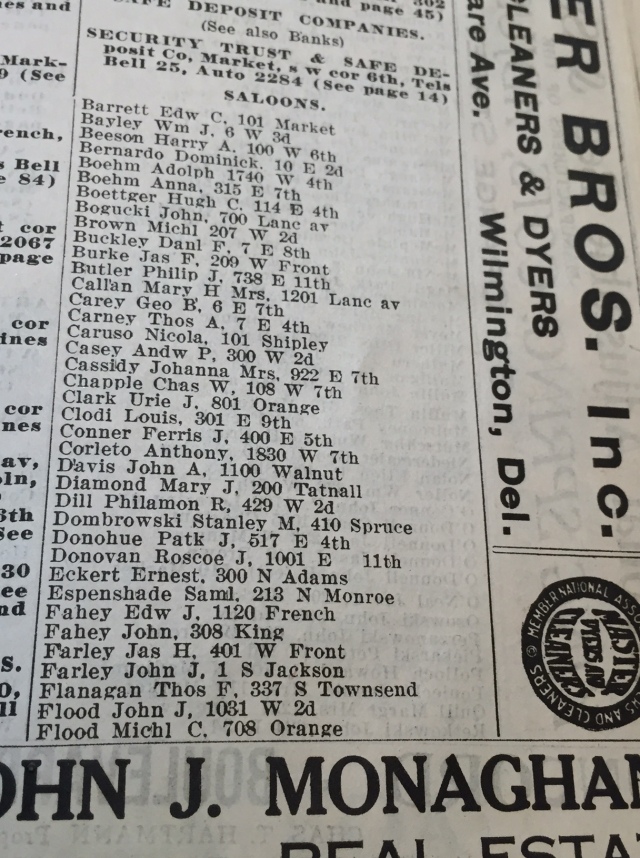 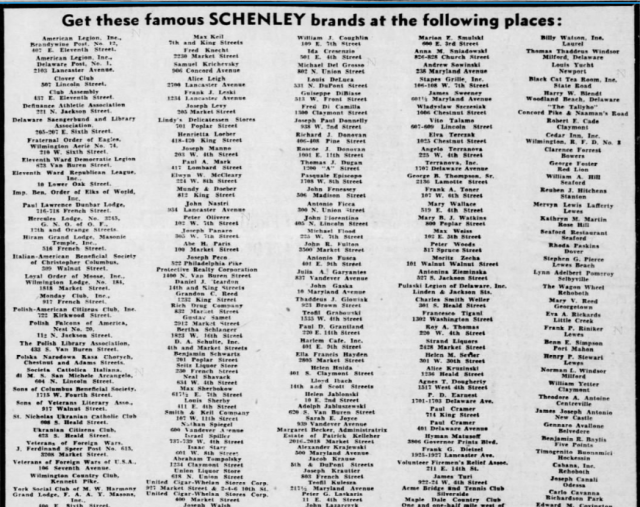 A Walk Down Market Street

In order to boost the public’s awareness of the reality of the coming war, in 1942 the city started hosting a ceremony in Rodney Square, and then a walk down Market St to the train station, on the date each draft class reported for duty.  Having spoken with several city residents who made this walk,  it was an incredibly emotional scene as everyone knew some of those would never return.  This article describes the emotional scene in great detail: 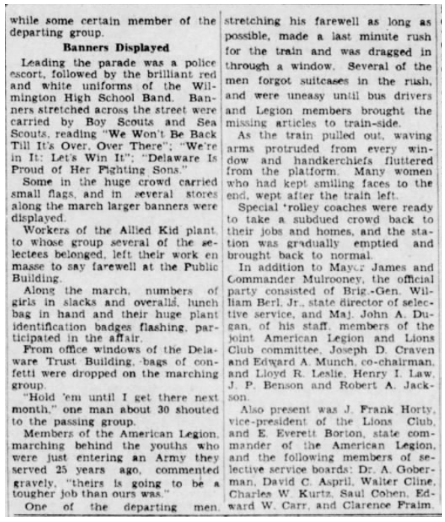 Placed in the school’s front lobby in 1951 it illustrates the scale of World War Two.  PS has only been open for less than ten years and 58 former students were killed, nearly all in 1944 and 1945.

Created in 1949 to honor the 34 graduates of the school who were killed during the Second World War: